We are a religious fellowship dedicated to providing a welcoming community where individuals can develop their spirituality free from imposed dogma and creed.
Facebook

Who Is George Lindamood?

In his youth, he aspired to become a mathematics professor, but by the time he had completed all his doctoral work except the dissertation, George had been seduced by computers. After a 42-year career in Information Technology, he enrolled at the Emerson Theological Institute, where he was ordained as a New Thought minister in 2006 and earned a doctorate in religious studies in 2011. His primary interest is world religions, which began when he was an undergraduate student in the 1950s, and he is also an accomplished musician (keyboards and trumpet; classical, sacred, and jazz). His appreciation of other religions and cultures has been intensified by lecture tours and periods of work and study in China, England, India, Japan, and Thailand.

George grew up in Marietta, OH, and his wife Annette in Woodsboro, MD. They moved to Sequim in 1995. Between them they have three children, eight grandchildren, four granddogs, and three grandcats, spread among Alaska, California, Minnesota, and Utah. 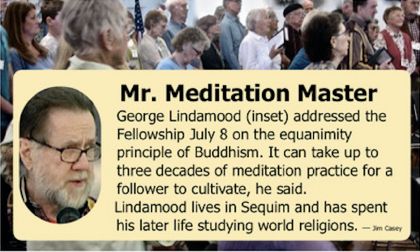 His formal writing career began in 1959 and continued through some 300 technical articles over the next 42 years. Along the way he also published about a dozen humorous essays and a few poems. In 2012 he published his first novel, The Accidental Peacemaker, in both paperback and e-book format, as well as several more poems. Another novel, a collection of memoirs about his experiences in Asia, and a children’s book are now awaiting his further attention. 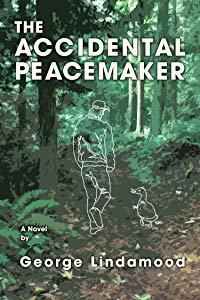 Story for all Ages – Sandy Goodwick

In his talk at OUUF two months ago, George used the character of a moose,

the great inscrutable equanimoose, to unravel the Buddhist concept of … read more.

Stalking the Inscrutable Equanimoose: The Buddhist Ideal of  Equanimity.